manorama on dismissal of ems govt

“I am on Left,” says Amartya Sen

"I am on Left," says Amartya Sen Hasan Suroor

Everyone is interested in justice as they see it

The stress should be on removing more visible forms of injustice

LONDON: Amartya Sen has called for the Indian Left to regard him as a friend saying that his criticism of the Left parties over their stand on the India-U.S. nuclear deal did not detract from the fact that he was very much a man of the Left.

"I am on Left and if Left want me I'm delighted," he said noting good-humouredly that he was criticised in India for questioning the Left's fury over the nuclear deal when, in his view, there were more pressing issues such as poverty and malnutrition to be furious about.

Speaking about his new book, 'The Idea of Justice,' to a full-house at the London School of Economics on Monday, Prof. Sen repeatedly referred to leading Marxist thinkers — including, of course, Marx's own writings — while presenting his alternative approach to mainstream theories of justice that he challenges in his book.

He said he was not claiming to break new ground by offering a comparative theory of justice and mentioned Adam Smith, Mary Wollstonecraft and Karl Marx among those whose works represented different versions of comparative thinking. Instead of looking for a "perfectly just society" they were more interested in the removal of "manifest" injustices from the world. His own idea of justice was inspired by their thinking.

"I remember my son when he was three complaining that his sister was not being 'just' to him!" he quipped.

As in his previous lectures on the issue, the Nobel Laureate argued that there was no such thing as "perfect" justice; that justice was relative to a situation; and that instead of searching for "ideal" justice, the stress should be on removing the more visible forms of injustice such as subjugation of women, poverty and malnutrition.

For example, if U.S. President Barack Obama was able to push through his healthcare reforms, it would mean removing a massive manifest injustice that affected more than 40 million Americans who didn't have access to health. This was a far more effective approach to fighting injustice than getting bogged down in the idea of "institutional justice"— the belief that once "just" institutions were created justice would follow.

Prof. Sen said Indian philosophy made the distinction between institutional justice and the actual "realisation" of justice. This was denoted by the two Sanskrit words "niti" — the principle of justice; and "nyaya" meaning delivering justice on the ground. His book is an argument for "nyaya."

"The idea of justice demands comparisons of actual lives that people can lead, rather than a remote search for ideal institutions. That is what makes the idea of justice relevant as well as exciting in practical reasoning," Prof. Sen says in his book.

In a wide-ranging speech and during his interaction with the audience, Prof Sen dealt with a host of issues, including the meaning of human rights, equity and fairness — and inevitably recounted his favourite story about three children who quarrel over a flute all arguing that their claim was the most ``just."

If you have come across any bright students coming from poor financial background who have finished their 10th standard this year (April 2009) and scored more than 80%,
please ask them to contact the NGO-Prerana (supported by Infosys foundation).
The NGO is conducting a written test and those who clear the test will be eligible for financial help for their further studies.
Please ask the students to contact the people mentioned below to get the form
#580,shubhakar,44th cross,1st 'A' main road,jayanagar 7th block Bangalore-mob no- 9900906338(saraswati)
Mr.Shivkumar(9986630301)- Hanumanthnagar office
Ms.Bindu(9964534667)-Yeshwantpur office

Even if you dont know anyone, please pass on this info, some one might be in need of this help desperately.

4th annual e-book fair is going on (http://worldebookfair.org/Collections.htm) from July 4 to August 4.  About 2 million pdf books are available for free download.

Email can have lot of character formatting, specially forwarded emails contain loads of ">" characters. Manually editing and removing such characters takes lot of time and effort. How about doing it with a click of button using StripMail? It is a free application that can free up email text from ugly character formatting. It does not require installation, just download and double click to start using the application. 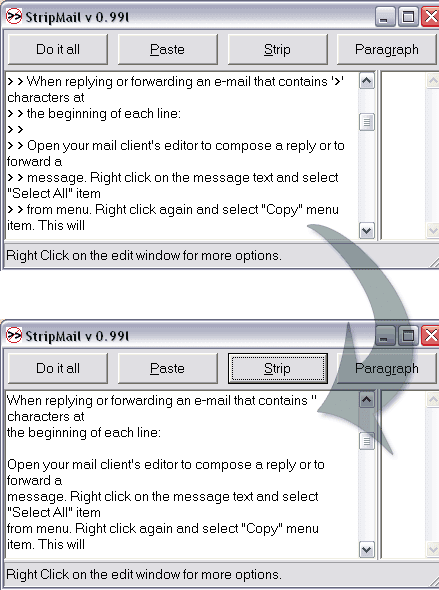 Also, you can click do it all button to perform strip, paragraph and other operations in one go. After formatting removal click copy button and then open your email inbox. Press Ctrl + V or right click then click on paste option to paste text without character formatting. Download StripMail to strip off ugly characters from email text in few simple clicks!

Fw: Must see - To all sons & daughters