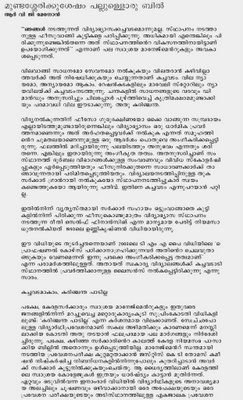 Survey points to high mental illness incidence in Kerala
Sangeeth Kurian
Findings of an NSSO survey on disabled persons in the country
THIRUVANANTHAPURAM: Kerala has earned the dubious distinction of the State with the highest number of people with mental illness in the country.
The State is also way ahead of the national average in terms of the number of people with various kinds of disabilities such as mental retardation, hearing, speech impairment and loco motor disabilities.
The findings are the highlight of a survey on `Disabled Persons in India' conducted by the National Sample Survey Organisation (NSSO) after a gap of 11 years.
This is the first time the survey contains information on mentally challenged persons, those with mental illness and retardation, along with the findings on persons with physical disabilities.
It is estimated that there are 272 persons per one lakh population in the State suffering from mental illness, while the corresponding national average is 105. The State is followed by the Andaman and Nicobar Islands (211), Himachal Pradesh (195) and Lakshadweep (177).
- - -
NRI account hacked: Rs 1.18 lakh missing
PUNE: The Bund Garden police have registered a case of fraud, following a complaint from a US-based software professional, who said that unknown persons had broken into his ICICI Bank account and illegally transferred Rs 1,18,038, using the net banking facility.
Thirty-two-year-old Vikram Gaikwad, who works for Tata Consultancy Services (TCS) in the US, is in the city while his father is undergoing treatment at a city hospital.
He originally hails from Khandala in Satara district. In his complaint to the police late on Thursday, Vikram said he first discovered that a sum of Rs 20,000 was missing when he checked his account using the net banking facility from a cyber café located at Gera Sterling Centre on North Main Road on May 24.
---
Posted by * at 1:01 AM No comments: