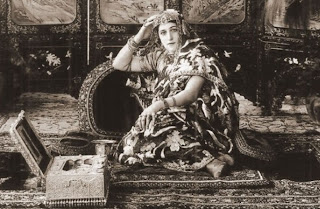 Among the many European women, who married Indian Maharajas, the most famous was undoubtedly Anita Delgado (1890-1962), the Spanish flamenco dancer who went on to become the Maharani of Kapurthala. Hers is the proverbial ‘Rags to Riches’ tale, with even a wealthy prince thrown in. Such is the pull of her enigmatic story, especially in her native Spain, that around half a dozen books has been written on her. Few years back, there was even talk of a Hollywood movie being made on her life, with Penelope Cruz playing playing the lead.
It was destiny, which took this young girl from small town Spain, to the riches of Kapurthala, halfway across the globe.

Anita Delgado Briones was born in 1890, in the small town of Malaga in southern Spain. Her parents ran a small café – La Castana, which also doubled up as a gambling den. However when the Spanish government banned gambling, Anita and her parents were forced to migrate to Madrid, in search of a livelihood. Her father failed to find work and the family’s financial situation went from bad to worse. It was during this time, that Anita and her sister Victoria, began to take dance lessons, from a neighbour, who taught for free. Despite their father’s disapproval, the sisters began dancing on stage to support the family.

Maharaja Jagatjit Singh of Kapurthala was completely enraptured by the 16-year-old Anita’s beauty.

It was in May, 1906, when Anita and her sister performed a curtain raiser act at the Kursaal Fronton, a modern nightclub in Madrid that things took a turn. The nightclub was extremely popular with the city’s well heeled and so international visitors as well.
That year there was an even more august gathering - those visiting Madrid to attend the wedding of King Alfonso XIII of Spain. Among them was Maharaja Jagatjit Singh of Kapurthala, who was completely enraptured by the 16 year old Anita’s beauty.

Maharaja Jagatjit Singh|Wikimedia Commons
One can only imagine the look on Anita’s face, when on the morning after her performance, a large silver carriage stopped by her house and a bejewelled man in turban stepped out, to confess his love for her! Within a week, the Maharaja’s secretary came with the formal proposal for marriage. Anita’s conservative Christian parents were aghast, but the offer from the Maharaja of one lakh pounds for ‘acceptance’, overruled their prejudices.

The Maharaja offered one lakh pounds for Anita’s parents’ acceptance.

Like Eliza Doolittle from My Fair Lady, Anita too was packed off to Paris for training and grooming, so she could wear a crown. The Maharaja maintained a large palace in Paris famous then as the ‘Pavillion de Kapurthala’. In her memoirs Anita, writes how she had to learn etiquette, several languages, geography, music, dancing, skating, tennis and even how to drive an automobile. Finally, after months of training and ready to be a Queen, Anita travelled to India in 1907. Landing in Bombay, a special Kapurthala rail saloon was waiting to take them to Kapurthala, where on 28th January 1908, they married as per Sikh rites. From then on, Anita was addressed as Maharani ‘Prem Kaur’ of Kapurthala.

They married as per Sikh rites and Anita was addressed as Maharani ‘Prem Kaur’.

In Kapurthala, Anita was not far away from European luxury, for Kapurthala was known as the ‘Paris of Punjab’. Maharaja Jagatjit Singh of Kapurthala was a francophile, who had modeled his state along French lines. He had built a large palace inspired by the French royal palace of Fontainebleau, and employed the best French cooks trained at the Hotel Ritz in Paris. Not only that, the royal family only drank the French Evian water, which was specially shipped from France to Kapurthala!

The Maharaja had built a large palace inspired by the French royal palace of Fontainebleau.

This was Anita’s honeymoon period. Anita writes how her husband, showing her the newly built French style palace said to her “I never imagined that a woman so beautiful would be the first to live here, but now I know it was destined to be you”.

Anita with her son Ajit|Wikimedia Commons
Soon after, Anita gave birth to a son named Ajit Singh. She even published her account of extensive travels in a book called ‘Impresiones de mis viajes a las Indias’ (The impressions of my trip to the Indies). In India too, Anita created a sensation. The British officialdom looked down upon her and refused to entertain her at functions. But at the same time, there was widespread curiosity about the ‘exotic’ Maharani. During her trips to Europe, photographers would follow her everywhere.

Anita’s book|Amazon
Anita spent a lot of her time at Mussoorie where the Maharaja of Kapurthala had a large palace called ‘Chateau de Kapurthala’. Here a number of Maharajas and their wives came to meet her. There is a well know story of how, during the visit to Hyderabad, the miserly Nizam Mir Osman Ali Khan fell in love with her. During a dinner, she found emerald jewels wrapped in her napkin, a gift from the Nizam, which were later found to be fake! It is during this visit, that she was photographed by the famous photographer Raja Deen Dayal, in an Indian sari and dripping with jewels (Cover image).

The Maharaja accused Anita of infidelity and threatened to divorce her.

However, not all stories have a happy ending. Maharaja Jagatjit Singh was notorious for having a roving eye. And as Maharani, Anita was expected to remain chaste while the Maharaja moved on to younger women and mistresses. It was in 1925, at the Hotel Savoy in London, that the Maharaja and Anita had a big, very public fight. The Maharaja accused her of infidelity and threatened to divorce her. Anita threw herself on the floor crying. There was such a scene created at the hotel, that of all people, Muhammad Ali Jinnah, a common friend of Anita and the Maharaja, who was staying at the same hotel, had to intercede on Anita’s behalf.
After 18 years of marriage, Anita and the Maharaja divorced soon after. Jinnah ensured that Anita got a generous financial settlement, and she returned to Europe.
In Kapurthala, Anita’s place as the ‘White Maharani’ was taken by another lady. In 1942, Maharaja Jagatjit Singh married a Czech named Eugenie Grosupova, who was an illegitimate daughter of a Czech count. She was given the name ‘Tara Devi’. However, shy and unwilling to mix with Indians, she was very different from Anita. Over time, the Maharaja’s interest in her waned too and this marriage ended tragically. On 9th December 1946, Tara Devi (taking her two dogs with her), went to Qutub Minar in Delhi and jumped from the 5th storey. Her body, and those of her two dogs, were found dangling from ledge of the 3rd storey of Qutub Minar. She was buried at the St James Church in Delhi.
It is said that Maharaja Jagatjit Singh never recovered from the shock, and passed away at the Taj Mahal Hotel in Bombay in 1949.
Meanwhile after her divorce, Anita lived a luxurious life with homes in Paris, Switzerland, Madrid and Malaga. It is said that she continued to wear her fabulous jewels and even eat with cutlery made of sold gold. She also spent time writing her memoirs, as she felt her story needed to be told. She passed away in 1962 at the age of 72. She left her jewels to her son Prince Ajit, and her other possessions to her nieces.

However, Anita’s strange story does not end with her death. Her son, Prince Ajit Singh served as an Indian diplomat in Buenos Aires and in London and died unmarried in New Delhi in 1984. Anita’s family had ended, or so it was believed until 2009, when a Lebanese-American Journalist Maha Akhtar published her bestselling book ‘The Maharani’s Hidden Granddaughter’, in which she revealed how her search for her birth certificate had revealed that she was Prince Ajit’s biological daughter, out of wedlock. A fact which she claimed was corroborated by her mother, on her deathbed. Maha even owns an amethyst ring which once belonged to Anita.
With so many twists and turns, it is no wonder that Anita’s life continues to inspire writers and film makers… after all no piece of fiction, could ever beat this tale!