But Mrs Gandhi rejected calls to resign and announced plans to appeal to the Supreme Court.

The verdict was delivered by Mr Justice Sinha at Allahabad High Court. It came almost four years after the case was brought by Raj Narain, the premier's defeated opponent in the 1971 parliamentary election.

Mrs Gandhi, who gave evidence in her defence during the trial, was found guilty of dishonest election practices, excessive election expenditure, and of using government machinery and officials for party purposes.

The judge rejected more serious charges of bribery against her.

Mrs Gandhi began an appeal against her conviction for corrupt electoral practices.

When opponents threatened to start a campaign of civil disobedience in protest at her refusal to resign, she controversially declared a state of emergency, claiming there was a plot to disrupt democracy.

Thousands were arrested, including about 20 MPs, and the Indian media was censored.

In August 1975 the Lok Sabha passed legislation to clear Gandhi of her corruption convictions retroactively.

She continued to lead her country until 1977, and then again from 1980 until 1984, when she was assassinated by two of her bodyguards.

1. Home is where you hang your @
2. The E-mail of the species is more deadly than the mail.
3. A journey of a thousand sites begins with a single click
4. You can't teach a new mouse old clicks
5. Great groups from little icons grow.
6. Speak softly and carry a cellular phone.
7. C:\ is the root of all evils.
8. Don't put all your hypes in one home page.
9. Pentium wise; pen and paper foolish.
10. The modem is the message.
11. Too many clicks spoil the browse.
12. The geek shall inherit the earth.
13. A chat has nine lives.
14. Don't byte off more than you can view.
15. Fax is stranger than fiction.
16. What boots up must come down.
17. Windows will never cease.
18. In Gates we trust (and our tender is legal).
19. Virtual reality is its own reward.
20. Modulation in all things.
21. A user and his leisure time are soon parted.
22. There's no place like <http://www.home.com>
23. Know what to expect before you connect.
24. Oh, what a tangled website we weave when first we practice.
25. Speed thrills.
26. Give a man a fish and you feed him for a day.
Teach him to use the Net and he won't bother you for months.

This is amazingly funny. A program that randomly generates Computer Science
research papers. Just go thru one sample, you'll be rolling on the floor!
And
whats even more funny is that it actually got accepted to a Conference!!!!

The Word of the Day is:

: an arrangement of five things in a square or rectangle with one at each
corner and one in the middle


Example sentence:
The tables were arranged in a quincunx, with the hosting family at the
center table and guests at the four corner tables.

Did you know?
In ancient Rome a "quincunx" was a coin whose name comes from the Latin
roots "quinque," meaning "five," and "uncia," meaning "one twelfth." The
weight of the coin equaled five twelfths of a "libra," a unit of weight
similar to today's pound. The ancients used a pattern of five dots arranged
like the spots on dice as a symbol for the coin, and English speakers
applied the word to arrangements similar to that distinctive five-dot mark.
---
1964: Nelson Mandela jailed for life
The leader of the anti-apartheid struggle in South Africa, Nelson Mandela, has been jailed for life for sabotage.

Seven other defendants, including the former secretary-general of the banned African National Congress (ANC), Walter Sisulu, were also given life prison sentences.

Crowds gathered silently outside the court building in Pretoria's Church Square waiting for the verdict to be handed down. Hundreds of police patrolled the area.

The Rivonia trial - named after the suburb of Johannesburg where the defendants were arrested - began eight months ago, with Mandela, 46, and his co-defendants proudly confessing their guilt to plotting to destroy the South African state by sabotage.

As members of the ANC - the main African nationalist movement - they have campaigned for an end to the oppression of black South Africans.

But the movement was banned in 1960 following the Sharpeville massacre and campaigners decided they had no choice but to resort to violent means.

Mandela - a lawyer by training - told the court earlier: "I do not deny that I planned sabotage. I did not plan it in a spirit of recklessness nor because I have any love of violence. I planned it as a result of a calm and sober assessment of the political situation that had arisen after many years of tyranny, exploitation and oppression of my people by the whites."

But the judge, President Quartus de Wet, said he was not convinced by their claim to have been motivated by a desire to alleviate the grievances of the African people in this country.

Judge de Wet said: "People who organise revolution usually plan to take over the government as well through personal ambition."

However, he stopped short of the imposing the supreme penalty of death.

The convicted men were cheered as they left court in a police lorry. The crowd was dispersed without any serious incident. 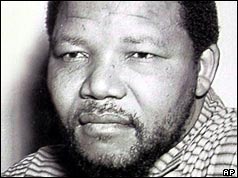 Like many Email providers, Gmail supports the standard "plus" addressing scheme. But just what is it, and how can it help me?

Using our example, say you email an invitation to your friends in a club asking them to rsvp to the invitaion. You ask them to reply to "john.doe+nope@gtmail.com" when sending you a responseif they don't want to come, and reply to "john.doe+ofcourse@gmail.com". Assuming they follow your directions, You can then set up a Gmail Filters to automatically route emails to specific Labels based on the addresses. It's a simple example, but the uses can be numerous.

Another use is when you are shopping online. When asked for an email address, use something like "john.doe+amazon@gmail.com". That way, whenever you get future emails addressed to that address, you'll know that it's either from Amazon directly or from someone to whom they sold your email address. This can be a somewhat effctive way to track spam. Just be aware that not all email systems recognize or accept "plus" addresses. In fact, some spammers even strip it out completely, but it's a cool tool, none the less. THe best way is to just try it and see if it works for your application!